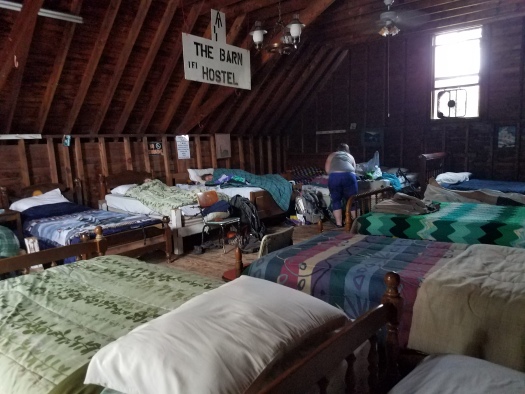 The Barn Hostel was full of comfortable full sized beds. Beds with sheets and comforters and no top bunks. My body was exhausted. The only catch was the 9am check out rule. So in the end…I stayed. I could feel my muscles vibrating, contracting, relaxing. I did not move. I stayed horizontally extended until mid-afternoon. Then, stiffer than ever before, I hobbled down the wooden steps to face the day and to socialize with other hikers and to write. I did face the day somewhat, this time from a couch instead of a bed. I socialized plenty while eating my fill of sweet potato. I maybe wrote a single line. Then, before I knew it, the sun had fallen and it was time to sleep again.

I rose early to catch the hostel provided shuttle to Pinkham Notch at 7:30 AM. They have wi-fi, I thought. I will just catch up on writing there.

I sat and sipped coffee in the dining hall at the Pinkham Notch Visitor Center. Hikers came and went. I chatted with some as I wrote. One kind hiker treated me to lunch. I wrote and wrote and time quickly slipped away. Soon, they were cleaning the dining area and preparing for the dinner buffet. It was time to make my exit. I headed downstairs to the pack room.

The pack room had tables and a bathroom with showers and vending machines and outlets and was open 24 hours. As I continued to write the day grew older. In the end, I slightly dimmed the lights and curled up on my sleeping mat beneath a counter, behind a table, at an angle of low visibility, and slept.