I woke up, slid from my sleeping bag, and began boiling water for coffee. It looked as though it would be another beautiful day.

An hour or so after I began, a hiker I knew came up behind me in a hurry. They had run out of food. They were trying to get to Route 4 to hitch in to Rangely.

“A big group of us are staying there tonight. You should come stay at the hostel with us and party!”

And off they went.

I would climb Saddleback Mountain today. From the elevation profile, it looked quite daunting.

It’s one of the last mountain ranges before Katahdin, I told myself.

I crossed Route 4, and began the slow climb up Saddleback. I took my time. I gazed out at the ponds. I perched myself on stones in the center of clear flowing streams and drank my fill of cold water. The ascent was mellow and pleasant, winding upward, slowly becoming steeper and slick with wide slanted slabs of stone. The summit was exposed and beautiful. 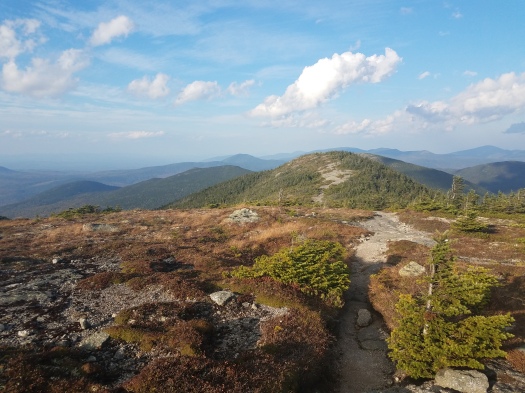 I could see the Horn, the northeastern peak of Saddleback Mountain, rise in the distance. It looked, well, large. 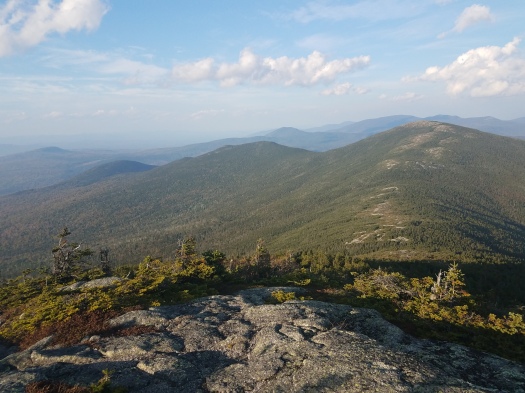 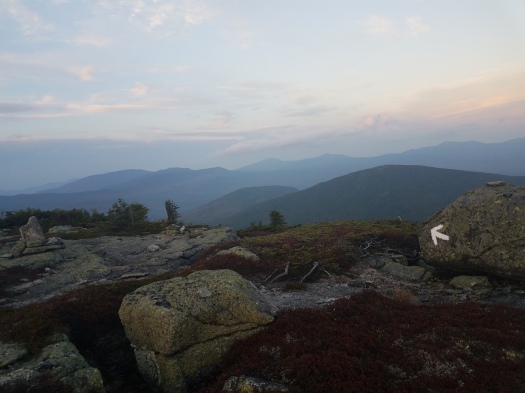 After what seemed like quite some time, crawling, and climbing, and side stepping, and bum-sliding, I made it over the Horn and back down below treeline to Redington Stream Campground. The descent was steep and rocky. I touched flat, safe, earthen ground just before the sun set completely.

My feet ached. I was exhausted. I was relieved to be back within the security of trees. I plopped myself in a clearing opposite the spur trail to the campground. I was hungry and needed a break. Just a break. I still had Saddleback Jr. to climb.

A few minutes after I situated myself alongside the trail, a disembodied headlamp came floating towards me. As it grew nearer I was able to recognize the body attached. It was a hiker I knew. He reported that it had grown extremely windy and slick up above treeline, and that he was done for the night.

He asked if I was staying. I told him I wanted to head on. He offered to collect water for me from the campsite. I thanked him kindly and handed him two empty bottles. I then turned my attention back to dinner.

I was nearly done with my meal of wheat pasta noodles mixed with plain mashed potatos and salt, when he returned with the water. “Thank you so much”, I said. We both said goodnight, and he disappeared off towards the campground.

Then; then, I pulled out my sleeping bag, slipped inside, extended my legs, my feet, my toes (it felt so nice!), and… fell asleep.

Then, as with a sharp jolt of consciousness,  I opened my eyes. All was dark and still. I glanced at the time. It was 1 am. I could hike. I could hike now, I thought. Before I could contemplate it further, a bright flash of light overcame the darkness.

Then a loud, rumbling, deep groan of thunder.

Not a moment later torrents, heaps, buckets of large sloppy, heavy, heaving drops of rain flew from the sky.

I shot up quickly, pushed my sleeping bag inside my pack in awkward haste, took off my puffy, put on my raincoat, pulled out my tent, and stared in horror at my things sprawled about the clearing that would have to now serve as a tentsite. I tried to gather my things off to the side using my bare feet, and then my hands.

I shook my tent and pole and stakes from its bag, connected the pole segments to form one long rod, slipped it through the center of my tent until the material stood erected, then attempted to steak out the sides. Attempted and failed.  I could only get three of the six in to the ground. It would not fit. It would not fit? What could I do? No, no. It had to fit! I lifted the tent from the ground and turned it to face the opposite direction and tried again. It was a sad, sad, display. Tent stakes placed in the loose bark at the base of trees. Tent stakes barely gripping duff. Tent material stretched over stones and logs. One stake was missing in action. I pinned my tent to the ground using a branch in its place. I threw my things inside and crawled in after them. I assessed the damage.

It was not good.

My things were drenched. I had my recently washed clothes attached to the outside of my pack to dry, along with my spare socks…now all wet. The only items that remained dry were my wool undergarments. I kept my undergarments, or “sleep clothes” protected from the rain in a large plastic zip-loc.

Thank goodness it is not cold. I removed my wet clothing and replaced them with the dry ones. The wool felt dry and snug and soft and warm against my skin.

I pulled out my stove and boiled some hot water, intent on putting something warm in my belly.

At least it is not cold, I thought. Then, silently willing my tent to stay erect through the night, I drifted off to sleep.