I woke around 4 am on the hard pack room floor. Someone walked through quickly, as though on a mission. I had dimmed the lights and was laying in what I felt to be the most inconspicuous part of the room, behind a table. I quietly watched them move. I don’t think they saw me. I stayed reclined for a little while longer, but packed up my sleeping bag.

I went to the dining hall and sat with coffee and fruit and wrote.

As employees packed up the breakfast buffet, I transitioned to the pack room once more. They are starting to recognize me, I thought.

I sat on a bench in the pack-room and continued my writing. Some other hikers came through. Hikers were catching up, hikers were passing me, I had to move.

That afternoon, I set out for the trail.

This would be the last section of the White Mountains: The Wildcats; extreme ups and downs and rugged terrain. I was certainly ready. Pack on, poles in hand, I marveled at the awkwardness of my stride. How is my body even more sore than before!?

After a strenuous climb and a short visit with a fellow hiker–as we both sat perched on a rock atop the mountain, gazing out at the magic of the clouds, of the peaks–I pressed on.

I had continued just a short while before I came to the gondola. I was enamored, entranced, in awe of the Presidential Range of the White Mountains that stood clearly in the distance. I stood, watching the sun set, the clouds hover and swirl, the silhouette of pines fringing the base of the range. 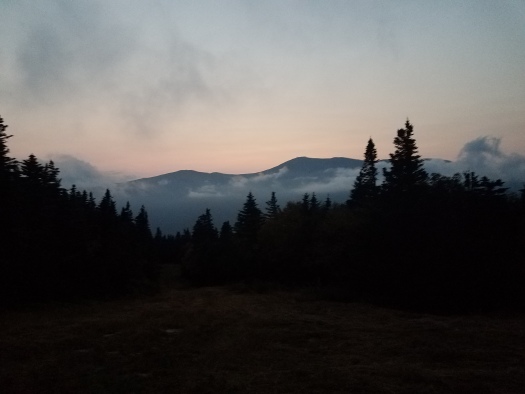 I felt as though I could not move. I felt a gravitational pull. I felt emotional. Is this the last time I would see the beloved mountains? The night was clear. I stayed. I stayed beneath a blanket of beautiful starlight, gazing all the while at the enchanting mountains that rose in the distance.

I was saying goodbye…for now.